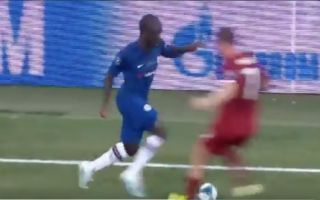 N’Golo Kante showed he’s a man of many talents this evening, as he pulled off a superb nutmeg on James Milner during Chelsea’s clash vs Liverpool.

The Blues are taking on the Reds in their UEFA Super Cup clash today, a match in which Kante decided to end the career of opponent Milner.

After a storming run down the right win, Kante cut back inside before slipping the ball through Milner’s legs, as he surely left the Liverpool star embarrassed!

Is there anything this man can’t do?