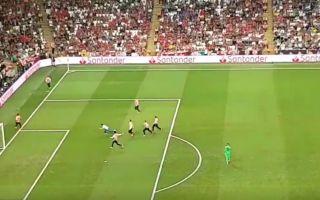 Liverpool saw yet another key European tie stopped due to a pitch invader today, after the Reds’s Super Cup clash vs Chelsea was momentarily put to a halt due to a fan running onto the pitch.

Jurgen Klopp’s side saw their Champions League final clash against Spurs partially stopped back in June due to a pitch invader.

And following this, the Reds have had yet another big Euro tie halted due to a similar incident.

As seen in the video above, tonight’s Super Cup tie was stopped for a brief moment due to a fan running onto the pitch and disrupting play.

UEFA really need to sort their stadium security out, it seems!