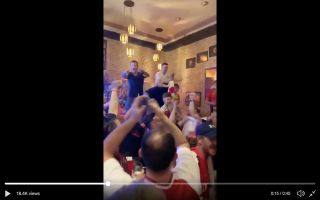 Arsenal fans have shown their love for Alexandre Lacazette with this increasingly popular chant, here’s how fans are reacting to the catchy song.

A chant for Alexandre Lacazette that was thought up in Baku ahead of Arsenal’s Europa League final against Chelsea last season has recently become massively popular with fans.

The chant is to the tune of Norman Greenbaum’s ‘Spirit in the Sky’.

The chant is certainly picking up some traction amongst fans with Football.London claiming that the song was belted out by Arsenal’s away support for their Premier League opener against Newcastle.

Here’s how the chant goes:

“He’s our Frenchman, he’s our No 9, he plays for Arsenal in red and white.”

“Scoring goals is what he does best, and he goes by the name of Lacazette.”

Take a look at the chant below:

Check out some reaction to the newly popular chant below:

Was singing it all day at college, my friends are united army and said: Stunning. #COYG

Was singing it all day at Work!

That is a belter to be fair

Lacazette has been a crucial player for the Gunners since he arrived from Lyon for a then club-record fee of £46.5m, as per BBC Sport.

The Frenchman has struck up an amazing partnership with Pierre-Emerick Aubameyang since he arrived in north London from Borussia Dortmund, the devastating strike duo have the ability to fire the Gunners back to the top.