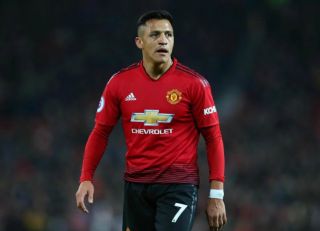 Despite experiencing a bitterly disappointing time at Man Utd, Alexis Sanchez is reportedly not short of interest ahead of the transfer deadline around Europe.

The 30-year-old has managed just five goals and nine assists in 45 appearances for the Red Devils since joining from Arsenal in January 2018.

Having already sold Romelu Lukaku to Inter this summer, it could be argued that Ole Gunnar Solskjaer can’t afford to lose another forward and so it’s questionable if they would green light an exit at this stage with an inability to sign a replacement until January at the earliest.

However, according to The Mirror, Sanchez could have the pick of four Italian giants as Juventus, Napoli, AC Milan and Inter are all said to be interested.

It’s added that the Chilean international may not get too many chances to impress this season with Solskjaer preferring to show faith in long-term solutions such as Marcus Rashford, Anthony Martial, Daniel James and Mason Greenwood.

In turn, they could certainly consider axing Sanchez as a good bit of business to trim their squad and wage bill, but it remains to be seen if a deal can be agreed with one of the clubs mentioned above.

The former Barcelona and Udinese star’s salary will surely also be a major stumbling block for any interested party, given he is widely said to be one of the top earners at Old Trafford with a mammoth contract.

Time will tell if United are able to offload him or not, but they won’t have long to get a deal over the line with the window closing in Italy on September 2.