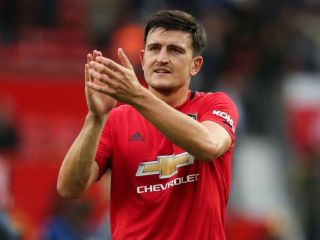 Former Man Utd goalkeeper Peter Schmeichel says he knew Harry Maguire could cut it at Old Trafford two years ago when he first saw him at Leicester City.

As noted by BBC Sport, the 26-year-old became the most expensive defender of all time this summer after his £80m move to Old Trafford.

SEE MORE: Video: Pogba laughing and joking on the floor with Fred in Man United training amid ongoing transfer rumours

The challenge is simple in that Ole Gunnar Solskjaer has signed him to bring stability and solidity to his leaky backline, but dealing with the new level of pressure and scrutiny will test just how good Maguire really is.

Schmeichel though insists that he knew long ago that the England international was made for Man Utd, as he has of course been a constant observer at the King Power Stadium while watching his son, Kasper, between the posts for the Foxes.

In turn, it’s fair to say that he’s seen more than enough of Maguire to know just how good he is and how influential he could be for Man Utd moving forward, and he has waxed lyrical about the towering centre-half as seen in his comments below.

“I have to say when I saw Harry the first time for Leicester when he played his first game he intrigued me straight away,” he told The Mirror. “A couple of games in I am thinking, “This guy is made for Manchester United”. He is not fazed about anything.

“He brings all that and an incredible ability to bring the ball forward. It is something you either have or don’t have and very few centre halves have that ability. He is going to bring stability in defence. He is a very calm, cool customer. There is nothing erratic about him.”

Maguire joined Leicester in 2017 and so Schmeichel has seemingly been waiting for almost two years to see him make the switch to Man Utd and shine. After a star performance in a 4-0 win over Chelsea in the Premier League season opener last weekend, the defensive ace certainly made a positive start to life as a United player.