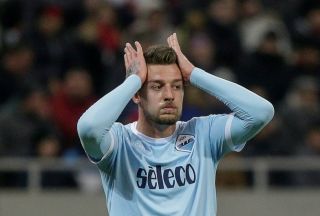 Lazio midfielder Sergej Milinkovic-Savic has appeared to pour cold water on the Manchester United transfer rumours that have dominated the headlines this summer.

The Serbia international has shone in his time in Serie A and it’s unsurprising that big offers may have come in for him in recent times, especially from United, who could do with more quality in the middle of the park.

However, speaking about the whole saga after the closure of the transfer window for Premier League clubs, Milinkovic-Savic seemed to write off all the talk of a possible move to Man Utd, hinting the speculation wasn’t true, describing it as just ‘paper talk’.

“I never said I wanted to leave Lazio, I feel good here,” he told Sport Plus, as translated by Calciomercato.

“I never mentioned a possible transfer to Manchester United and it was just paper talk. New commitments await me with Lazio.”

It remains to be seen if the same old transfer gossip surrounding the player will surface again in January, but there’s no doubt the 24-year-old could be a superb signing for the club if a deal ever does happen in the near future.

United lost Ander Herrera to Paris Saint-Germain on a free transfer and could surely do with upgrades on the likes of Nemanja Matic, Fred and Andreas Pereira in that area of the pitch, while Marca linked Milinkovic-Savic with MUFC as a potential replacement for Paul Pogba.

Still, the player’s comments perhaps suggest we’re not as likely to see him at Old Trafford as it may have looked for some time.