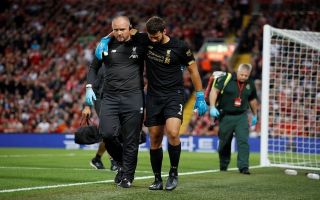 Liverpool goalkeeper Alisson is currently sidelined with a calf injury, but he still showed his support for the squad in midweek against Chelsea.

The Merseyside giants triumphed over their Premier League rivals in Istanbul after a penalty shoot-out to secure the UEFA Super Cup on Wednesday night.

Alisson, 26, has been ruled out of action for the “next few weeks” by Jurgen Klopp, as per the club’s official site, after he was forced off in the first half of the season opener against Norwich City last week.

In turn, summer signing Adrian has been forced to step in much earlier than he would have expected, and he responded with the pivotal penalty save in the shoot-out to secure the club’s first trophy of the season.

The Spaniard will now be expected to deputise until Alisson makes a full recovery, although his form and confidence should now rocket and give Klopp reassurances that they will be fine without their first choice shot-stopper between the posts.

Alisson though showed his support in the best way he could as he wasn’t able to travel with his teammates, and as seen in the image below, he posted a good luck message to his Liverpool teammates on Instagram, while also revealing that he’s wearing a protective cast on his injured leg.

The Brazilian ace posted another update after the match as Liverpool celebrated their victory, and they’ll be hoping that despite Adrian’s heroics, that Alisson can make a speedy recovery and get back onto the pitch as quickly as possible.

Alisson wearing a removable protective cast (possibly short version). Not typically associated with calf injuries – more ankle / foot – but certainly not unheard of. May have a heel insert to ease pressure on the Achilles / calf. #LFC pic.twitter.com/s87zWYy6m9