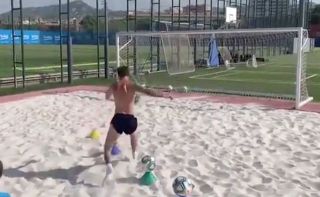 Lionel Messi is working hard as he continues his preparations for the new season as Barcelona look to compete for more trophies this year.

As noted by Goal.com, the Barca talisman is expected to miss the season opener against Athletic Bilbao on Friday night due to a calf problem.

In turn, it does raise question marks about when the video below was filmed, as on the basis of this workout, the Argentine international looks to be in good health and in shape.

Time will tell whether or not he is passed fit to feature this weekend, as Barcelona would undoubtedly hope to have him available as they look to make a winning start to the defence of their La Liga crown.

The Catalan giants saw Messi enjoy another sensational season last year as he bagged 51 goals and 22 assists in just 50 appearances, with the 32-year-old showing no signs of slowing down.

He won’t want the start of the new campaign to be disrupted by this calf strain for too long though, and if this video is from this week as he gears up for another gruelling season, it looks as though he isn’t far off from being in contention.

Beware @LaLiga defences, Leo Messi is aiming to come back stronger than ever ? pic.twitter.com/Pc0VvEhxsG