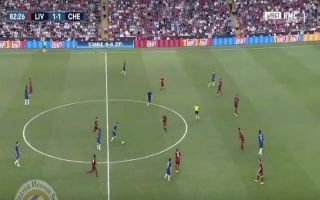 Chelsea midfielder Mason Mount was denied the winning goal by the linesman in a UEFA Super Cup clash with Liverpool on Wednesday night.

The Blues matched their Premier League rivals in normal time, as the game was forced into extra-time at 1-1 after the first 90 minutes, with Olivier Giroud and Sadio Mane the scorers.

Both teams found the net again in the extra period to make the scoreline 2-2, through Mane and Jorginho respectively, but penalties were ultimately needed to decide who lifted the trophy.

In the end, Liverpool triumphed 5-4 on spot-kicks when Tammy Abraham was denied by Adrian, giving Jurgen Klopp’s side their second trophy of 2019.

The final result may have been different, however, had Mount’s brilliant 83rd minute finish been allowed to stand, as he raced onto a superb through ball from Jorginho before firing past Adrian.

The goal was chalked off for offside, but it was a tight decision which on another day, might have gone the other way.