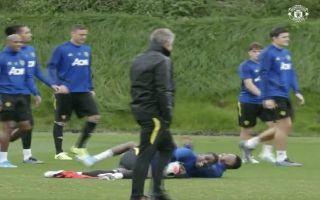 Paul Pogba seems happy at Manchester United despite ongoing speculation over his future, if his back and forth with Fred in training is anything to go by.

The Daily Mirror reports that Pogba has been on Real Madrid’s radar ever since he expressed a desire to undertake a new challenge at the end of last season.

The Red Devils have insisted that a prized asset will not be sold this year, but the Spanish transfer window does not close until September 2, which means Madrid still have time to try and negotiate a deal.

Pogba doesn’t appear to be distracted by the ongoing transfer rumours, however, after he followed up an impressive pre-season with a strong performance in United’s 4-0 opening Premier League win over Chelsea at the weekend.

He has also been seen laughing and joking with Fred on the floor in training, ahead of United’s next fixture against Wolves on Monday.

Check out Pogba enjoying life in Manchester below, via Twitter.