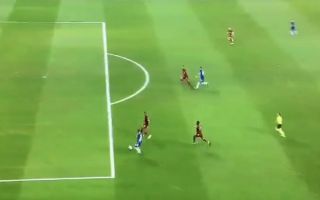 The showpiece event in Istanbul ended in Liverpool’s favour, after a tense penalty shootout which the Blues ended up losing 5-4.

The match finished 2-2 after extra time, with Sadio Mane netting a brace for the Reds while Olivier Giroud and Jorginho found the net for Chelsea.

Pulisic thought he’d put the Blues 2-0 up after 39 minutes, but he was denied by the offside flag after scoring a superb Eden Hazard-esque goal.

The American picked up an Emerson through ball on the left-hand side and left two Liverpool defenders for dead in the box before firing past Adrian, only to have his celebrations cut short by the linesman.

Hazard left Chelsea to join Real Madrid earlier this summer, but if Pulisic can come up with a few more moments like that this season, he could yet fill the Belgian’s sizeable boots at Stamford Bridge.

Pulisic with a disallowed goal that would’ve been a disgusting first competitive goal. #USMNT pic.twitter.com/0U7KLRcSVq