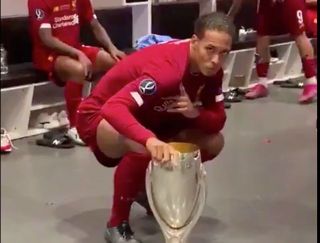 Liverpool picked up the UEFA Super Cup on Wednesday night in Istanbul, eventually seeing off rivals Chelsea on penalties to claim their first trophy of the season.

The Merseyside giants will hope for more before the campaign ends, but it was a positive way to get things started after their win over Norwich City in their Premier League opener last week.

As seen in the video below, Virgil van Dijk was particularly delighted with having another trophy to add to the collection, as he pulled off all his best poses in the dressing room for the cameras.

Unsurprisingly, it got plenty of positive comments from Liverpool fans who were loving the Dutchman’s modelling, as he clearly has a future in it after hanging his boots up.

For now though, he’ll hope to continue to play a fundamental role at the back in ensuring that the Reds continue to compete for major honours moving forward as they’ve added another after their Champions League triumph last season and will undoubtedly be hungry for more moving forward.

Video: ‘We don’t think about that’ – Liverpool looking ahead to the Merseyside derby and not for revenge says Klopp
More Stories Virgil van Dijk