One of Liverpool’s high-profile stars has revealed that he could pursue an exit this summer before the European transfer window closes over concerns with his playing time.

According to The Sun, Liverpool star Xherdan Shaqiri has revealed that he could leave the Champions League winners this month.

The 27-year-old has revealed to The Sun that he’s not happy with his bit-part role for the Reds, the attacking midfielder made 13 league starts for the side last season.

Shaqiri’s growing concerns are understandable however as the ace hasn’t featured in Liverpool’s clashes against Norwich and Chelsea so far this season.

With the transfer window still open for Europe’s other top leagues, Shaqiri does have the chance to push for an exit until early next month.

Blick reported last month that the Merseyside outfit would be prepared to part with the Swiss star for €36m (£32.8m). 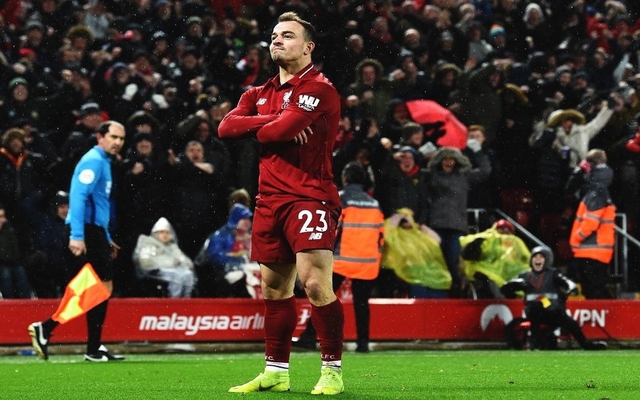 Shaqiri’s most notable performance for Liverpool was against heated rivals Manchester United, the attacking midfielder scored a game-winning brace.

Here’s what Shaqiri had to say on his role in the team and a possible departure:

“I’m disappointed that I am no longer getting to play in matches. No player is happy to sit on the bench.”

“It is clear that I would like to have more playing time. I need to take a good look at the situation and find a solution.”

“[Monaco and Galatasaray?] I have no idea where those stories have come from.”

“I don’t know anything about offers from those clubs.”

Shaqiri will likely struggle to win a place in the team this season given that Alex Oxlade-Chamberlain has returned from his long-term injury and that Divock Origi became a hero for the Reds last season.

Despite the strength of Jurgen Klopp’s starting eleven, it would be wise for the German to convince Shaqiri to stay as a lack of depth in the first-team was arguably the biggest reason why Manchester City beat the Reds to the Premier League title last year.