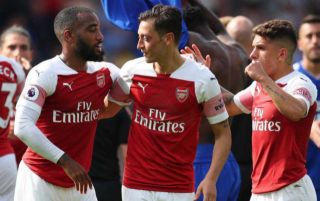 Mesut Ozil’s agent has reportedly held talks with DC Utd as the Arsenal star could be set for an exit from the Emirates either in January or next summer.

The 30-year-old endured a disappointing season last year as he managed just six goals and three assists in 35 appearances for the Gunners.

At times he even struggled to hold down a regular place in Unai Emery’s starting line-up and that has continued in pre-season.

Further, as noted by BBC Sport, Ozil and teammate Sead Kolasinac went through a terrifying ordeal last month after an attempted carjacking, while the duo missed the opening game of the season against Newcastle United last weekend due to security reasons.

In turn, with issues on and off the pitch in mind in north London, it could be a good time to seal an exit and try something new, and it’s claimed by the Daily Mail that Ozil’s agent is in discussions over a move to DC Utd to replace Wayne Rooney as their marquee signing.

It’s noted, via the Washington Post, that Ergut Sogut has been in Washington to discuss the move as well as having a tour of the franchise’s stadium and proposed training ground to try and sell the vision and give him a better view of the infrastructure and ambitions of DC Utd moving forward.

It’s added that while the MLS side want a January move, they could be forced to wait until next summer before landing Ozil, but time will tell if the issues surrounding the carjacking incident continue to prevent Ozil from featuring as he would like.

The safety and security of his family will undoubtedly come first, and coupled with the fact that he could continue to struggle to secure a prominent role under Emery at Arsenal this season, particularly after the additions of Nicolas Pepe and Dani Ceballos this summer, it could make a switch Stateside all the more appealing.