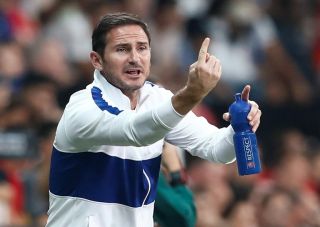 Chelsea striker Tammy Abraham feels that his team has what it takes to challenge for the Premier League title this season.

The Blues had a disastrous start to the Premier League as they were trounced 4-0 by Manchester United at Old Trafford.

However, Frank Lampard’s side came back strongly in the UEFA Super Cup against Liverpool on Wednesday but fell short as the Reds won 5-4 on penalties with Abraham’s penalty being saved by Adrian.

After the defeat in Istanbul, the Blues will hope to register their first win of the season on Sunday when they take on Leicester City.

Abraham has said that the match against Liverpool suggests that his teammates are adapting to Frank Lampard’s playing style and provided they keep on doing that, the Blues can challenge for the league title.

As quoted by the Guardian, the 21-year-old said: “A lot of the boys see the way he wants us to play and we tried to play like that against Liverpool. We showed glimpses of what we can do. We’re a threat, we’re good defensively and we can attack.

“We just have to build on it. The whole team fills me with confidence. Every training session, before every game, they always lift me. I just have to push on this season and hopefully we can be up there to fight for the title.

“We would have liked to win the final and at United but it is still early doors. There is still a long season ahead and we are still in big competitions as well. It’s about how we react now. The points on Sunday will be massive for us.”

Chelsea may not have lifted the Super Cup on Wednesday but given how they played against Liverpool, the players will certainly feel confident.

However, Lampard’s side will have to keep on producing similar performances against other teams if they are to challenge the Reds and Manchester City for the Premier League title.