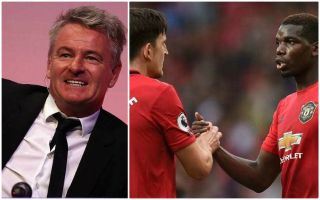 The former Celtic and Arsenal star made the statements during his predictions for this weekend’s Premier League fixtures, in a exclusive prediction piece by Sky Sports.

Maguire was solid in his debut where Ole Gunnar Solskjaer’s side humiliated Chelsea in a 4-0 thrashing.

Criticism towards Pogba from a pundit is nothing new, the Frenchman has often been targeted by the media for various on and off-the-pitch reasons since returning to the Red Devils from Juventus.

Harry Maguire impressed on his Manchester United debut against Chelsea.

Here’s what Nicholas had to say on Pogba and Maguire:

“I thought Harry Maguire was average, he did everything that was asked of him. He was efficient and got about the pitch, but I don’t want to hear nonsense about him being a leader and strong on the pitch already, it is too soon.”

“He has started well, but I am suspect about the right-back and left-back positions at Man Utd. Chelsea could have easily scored two or three. I am still not convinced by Manchester United and I would still sell Paul Pogba.”

See More: One of our writers got an exclusive look into how some of the biggest transfers happen with an in-depth interview with a agent.

Maguire sealed a marquee move to United this summer, the Sun understand that the Red Devils have broken the world record fee for a defender by paying £85m for the England international’s services.