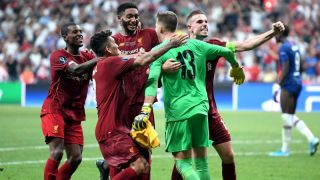 Liverpool boss Jurgen Klopp has revealed that Adrian could be a doubt to face Southampton this weekend after picking up an injury after the win over Chelsea in midweek.

The shot-stopper was the hero in Istanbul as his penalty save in the shoot-out secured the UEFA Super Cup for the Merseyside giants.

SEE MORE: €15m exit for Liverpool stalwart at risk of collapse over key issue in talks

It comes after he stepped in following Alisson’s calf injury in the Premier League opener against Norwich City last week, and so he was set to prove to be crucial to Klopp to provide cover for his first-choice goalkeeper.

However, the German tactician now has a major headache on his hands as he has revealed that Adrian will be assessed ahead of the trip to Southampton, as per the club’s site, and so it remains to be seen whether or not he is passed fit to feature.

In a rather bizarre way to pick up a problem, it’s been reported that Adrian suffered the ankle issue during the celebrations after the game when a fan ran on to the pitch to join in with the players, as noted in Paul Joyce’s tweet below.

That could prove to be very troublesome for Klopp depending on how long Adrian is out for, as he has previously confirmed that Alisson will be ruled out of action for at least a few weeks.

Should Adrian also be ruled out this weekend, that could leave Klopp with a big headache and a decision to make over whether it’s Andy Lonergan or youngster Caoimhin Kelleher who gets the nod between the posts against the Saints.

Naturally though, he’ll be hoping that the swelling goes down and that scans reveal Adrian is fine to feature as he’ll also be desperate to build on his heroics in midweek.