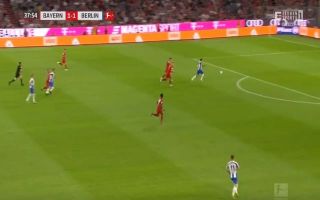 Marko Grujic signed for Liverpool back in 2016 but has only managed to make eight league appearances for them since then. He’s been out on a few loan spells and has got his season off to a wonderful start by giving Hertha Berlin the lead away to Bayern Munich.

Bayern looked on their way to a routine home win when Robert Lewandowski gave them the lead, however two quick fire goals have put Hertha in front.

Grujic scored the second goal by latching onto a through ball and showing outstanding composure to finish the move.

He makes it look so easy when you consider a lot of players would buckle under the pressure as Manuel Neuer rushed out to meet him.

The Serbian was on loan at Hertha last season and managed five Bundesliga goals in 22 games.