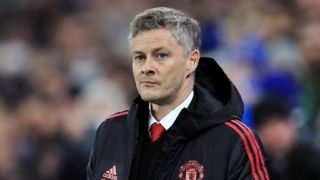 Manchester United reportedly made a €90m bid to sign Napoli centre-back Kalidou Koulibaly before deadline day, but the Serie A giants rejected their offer.

The Red Devils signed Daniel James, Aaron Wan-Bissaka and Harry Maguire this summer. Maguire cost Manchester United a reported £80 million according to Sky Sports. The England international wasn’t the only centre-back the Premier League giants were keen on signing.

According to Corriere dello Sport (via The Sun), Manchester United made a late bid of €90 million (£83 million) to sign Koulibaly. However, the Serie A side rejected the offer.

The Senegal centre-back has established himself as one of the finest defenders in the world through his performances for Napoli. So far, Koulibaly has made 212 appearances for the Naples outfit, scoring 10 goals and providing 5 assists.

Last season, Koulibaly was a key reason why they conceded only 36 goals. Following an impressive 18/19 season, the 28-year-old helped Senegal reached the AFCON final. However, he was suspended for the final where his country lost to Algeria 1-0.

Maguire had a fine debut with Manchester United but had the Red Devils signed Koulibaly, their defence would have been a nightmare for the opposition attackers.

However, it appears as though once they saw their bid for the towering centre-half rejected, they ensured that a deal was done for Maguire to shore up their leaky defence from last season.