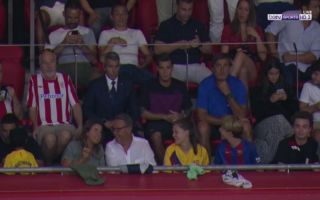 Philippe Coutinho has been spotted at Barcelona’s clash against Athletic Bilbao at the San Mames this evening amid reports he’s set to seal a loan move to Bayern Munich.

As per journalist Fabrizio Romano, Coutinho is close to finalising a move to Bayern Munich, with RAC1 stating, via the Mirror, that this move will be an initial season-long loan switch.

Philippe Coutinho to Bayern Münich, here we go! Total agreement between Bayern and Barça after the Brazilian refused to be part of Neymar deal with PSG. ? #Coutinho #Bayern #Barça #transfers

And amidst this news, Coutinho has been spotted at Barca’s game this evening, as seemingly watches his teammates play for one last time before being loaned out to Bayern for the next 12 months.

Coutinho in the stands pic.twitter.com/tTxbVQV0Qq

Will the Brazilian end up being a success in the Bundesliga? We’ll just have to wait and see…

Video: Karim Benzema gets his second after brilliant Paul Pogba pass as France turn it around vs Portugal