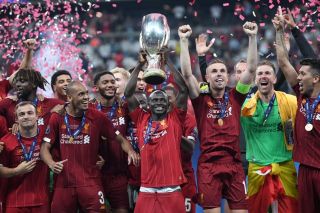 Liverpool star Sadio Mane has praised his teammate Roberto Firmino for assisting his goals in the UEFA Super Cup on Wednesday.

The Senegal winger netted twice against Chelsea in Istanbul and both of his goals were assisted by Firmino who came on as a substitute for Alex Oxlade-Chamberlain.

The Blues put up a strong fight against Jurgen Klopp’s side and took the match to penalties where Liverpool won 5-4 after goalkeeper Adrian blocked Tammy Abraham’s spot-kick.

Mane was named the Man of the Match for his brace. Following the match, the 27-year-old modestly thanked his teammates, singling out Firmino for his contribution in his goals.

As quoted by Liverpool’s official website, Mane said: “To be honest, I think I was just a lucky boy. I think all the credit should go to my teammates, especially Bobby – he could have scored but he preferred to give it to me.

Out of all the Liverpool players, Mane had the shortest break this summer as he endured a hectic AFCON campaign, helping Senegal to the final.

However, the 27-year old seemed fresh against Chelsea and was very lively throughout the match. Last season’s joint Premier League Golden Boot winner will hope to score his first league goal/goals of the season this weekend when Liverpool play his former club Southampton.