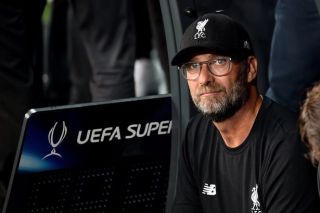 Former Liverpool captain Graeme Souness was not pleased with the Reds’ performance in the UEFA Super Cup, singling out Fabinho for criticism.

The Reds won their second trophy within two months by beating Chelsea 5-4 on penalties. Despite conceding first thanks to Olivier Giroud, Liverpool equalised through Sadio Mane who also put them ahead in extra time.

However, Chelsea won a penalty and Jorginho converted it to take the match to penalties where Adrian saving Tammy Abraham’s spot-kick turned out to be decisive.

Despite lifting the trophy, Liverpool did not look their best and often struggled against Frank Lampard’s side. N’Golo Kante, who just returned from an injury, was more dominant than any of the Reds midfielders.

Souness was disappointed with how his former team fared against Chelsea and feels that Jurgen Klopp’s side didn’t look like the one which was sensational last season. The former Scottish international was also critical of how Fabinho was helpless against Kante during the match.

As quoted by the Metro, Souness told Virgin Media Sport Ireland: “This guy [Fabinho], twice he had Kante dance past him as if he had Jacques Cousteau boots, lead boots on. They were not Liverpool. I’m not seeing a Liverpool that resembles the Liverpool we saw last season. I’m amazed Liverpool were more tired than Chelsea – they’ve had two extra days to rest.”

Fabinho didn’t have his best days in the middle of the park but he did play a part in Liverpool’s equaliser early in the second half.

The Brazilian also converted his penalty in the shootout. So far, the Reds haven’t been the lethal side they were last season but it’s still early. Liverpool still have a lot to improve upon and there’s no doubt that they will. Klopp’s team next play Southampton at St. Mary’s Stadium tomorrow.