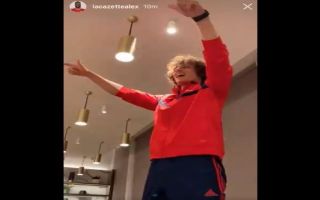 The initiation song seems to be a pretty standard thing at most football clubs these days, and David Luiz’s effort was caught on camera by one of his teammates.

His voice is pretty awful but he shows some great perseverance and confidence to battle his way through the song much to the amusement of his new teammates.

David Luiz is settling in just fine as a Gooner ? pic.twitter.com/IzpqRBmjPp

The video seems to have been captured by Alexandre Lacazette so you would imagine it’s his voice you can hear in the background.

Arsenal fans will be happy to overlook this as long as he brings some solidity and steel to the defensive line this season.