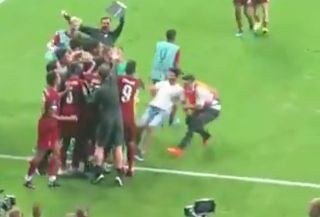 Adrian has emerged as a doubt for Liverpool’s clash with Southampton this weekend, and here’s the fan in question who has given Jurgen Klopp a real headache.

The Merseyside giants are already without Alisson after he suffered a calf injury in the opening fixture of the season against Norwich City last week.

SEE MORE: €15m exit for Liverpool stalwart at risk of collapse over key issue in talks

In turn, the last thing Klopp and Liverpool needed was for Adrian to suffer a setback as well, leaving them short of options between the posts.

It remains to be seen if the Spaniard gets the green light from the medical staff to feature as he’ll hope that the swelling goes down and scans reveal it isn’t serious over the next 24 hours, but ultimately it’s a concern for Liverpool.

Klopp wasn’t impressed by the issue of fans getting onto he pitch in his press conference on Friday, and here is why as it has led to an injury for one of his players…

The moment when Adrian got taken out by a pitch invader after the Super Cup.
He is now a doubt for tomorrow’s game at Southampton due to a swollen ankle.