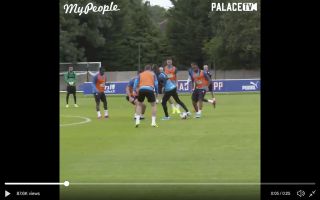 Wilfried Zaha has silenced rumours that his mind is elsewhere by stunning his Crystal Palace teammates with some insane skill before scoring a superb goal in training.

The Ivorian dazzled Dann with some fancy footwork before charging towards goal and holding off Jeffrey Schlupp before hitting the back of the net.

Zaha will be raring to pick up where he left off last season now the English transfer window has closed, the tricky winger is coming off the back of the best season of his career.

Take a look at Zaha’s stunning solo goal below:

It’s easy to see why Zaha is being courted by some top clubs after seeing skills like this.

According to The Sun, Chelsea are eyeing a stunning move for the £80m-rated star in January if they can manage to overturn their transfer ban.

Arsenal were heavily linked with Zaha this summer, according to Sky Sports News, the Gunners failed with an audacious £40m bid to sign the attacker, a separate report from Sky Sports reveals that the Eagles value the star at around £80m (€89m).

Palace manager Roy Hodgson also revealed that he was unsure if he could ward off interest from European giants in his prized asset before the European window closes, as per Four Four Two.