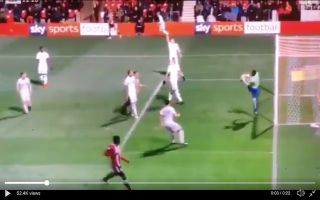 Some Liverpool fans aren’t confident in Andy Lonergan after a Leeds fan took to social media to show this error from the goalkeeper less than two years ago.

One Leeds fan has taken to Twitter to show this mistake from Liverpool goalkeeper Andy Lonergan, the ace is expected to make his debut between the sticks against Southampton after injuries to both Alisson and Adrian.

The clip shows Lonergan dropping a routine catch for Leeds which allowed former Brentford and current Brighton star Neal Maupay to put the ball into the back of the net.

According to the Liverpool Echo, the Reds have signed the 35-year-old to a one-year deal as they look to bolster their goalkeeping ranks.

Here’s the bizarre moment Adrian was injured by a Liverpool fan during Wednesday evening’s celebrations.

Take a look at the veteran stopper’s blunder below:

Less than 2 years ago, I was stood on the terraces at Brentford watching Andy Lonergan do this.

Tomorrow he’s going to start for the European champions in the Premier League pic.twitter.com/P2RkdLIqJa

Check out some reaction to Lonergan’s past mistake from Liverpool fans:

Jurgen’s Reds are a crazy ride

Can’t wait to see this tomorrow mate ??? hopefully are strikers can out score his mistakes

Liverpool conceding this weekend is a fact Haha

Make sure that Ralph Hassenhutl are Southampton doesn’t get to see this clip.

And still a step up from Karius ?

It’s fine, we’ll just play Milner in net, the man can do anything

It seems a bit harsh that one fan has decided to dig out Lonergan in what is arguably the biggest moment in his career, Jurgen Klopp will be hoping that the stopper is up to scratch against Southampton this weekend.