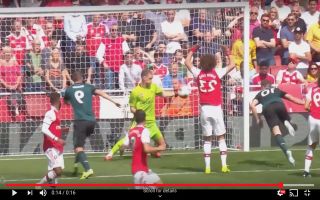 Some Arsenal fans couldn’t believe Bernd Leno’s stunning save against Burnley, the German kept out a point-blank header from Ashley Barnes.

During Arsenal’s 2-1 victory against Burnley, Bernd Leno was called into action to deny Sean Dyche’s side from taking control in the game.

The Germany international made a sensational stop to deny Ashley Barnes’ close-range header, it was later ruled that the forward was offside but this was still a cracking save from Leno.

Check out the Germany international’s stop below:

Incredible reaction save by Leno this. (it was flagged for offside later though) pic.twitter.com/t7jttfLdlK

Here’s some reaction to the star’s save:

Leno with a sublime save. #COYG

YO THAT LENO REFLEX SAVE IS WILD #ARSBUR

It’s off bt nice save leno

Incredible save from Leno! ? Really enjoy watching him keep.

Still… What a save ? #leno #ARSBUR

Brilliant save by leno regardless offside ball ???

Save of the season… offside or not.

Leno still has some work to do before putting himself in the mix alongside Liverpool’s Alisson and Manchester City’s Ederson, but the 27-year-old still holds his own with the rest of the top six stoppers.