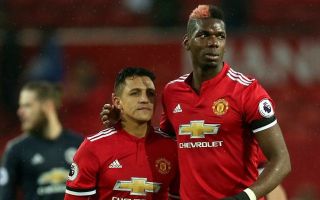 Manchester United star Alexis Sanchez is reportedly among the list of players Inter Milan are targeting after missing out on Edin Dzeko who extended his stay at Roma till 2022.

The Bosnian international was one of the Nerazzurri’s top transfer targets with Sky Sports claiming last month that the club made a bid of €15 million to sign him. However, the 33-year-old striker eventually renewed his contract at Roma for another three years, as confirmed by the club.

After missing out on Dzeko, the Serie A giants are monitoring four players according to Gianluca Di Marzio. They are Sanchez, free agent Fernando Llorente, Eintracht Frankfurt’s Ante Rebic and Napoli’s Arkadiusz Milik.

Sanchez has been lacklustre for Manchester United since joining the club from Arsenal last January. The Chilean international has netted just 5 goals and has provided 9 assists in 45 appearances for the Red Devils so far. Last season was disastrous for the 30-year old as he scored just twice and provided 4 assists in 27 appearances across all competitions.

However, Sanchez impressed for Chile in the Copa America this summer, scoring two goals and providing an assist as his nation finished fourth in the competition.

Manchester United already have the likes of Anthony Martial and Marcus Rashford as attacking options and Mason Greenwood could receive some game time too after impressing in pre-season. Summer signing Daniel James impressed on his Red Devils debut, scoring their fourth goal against Chelsea.

Hence, there is a good chance Sanchez won’t get many first-team opportunities. Inter could be a suitable option for the Chilean where he could certainly find more minutes under Antonio Conte.