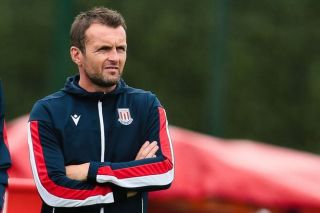 Dean Ashton feels that Stoke City manager Nathan Jones could face the sack as early as October after his team’s disastrous start to the season.

The Potters who finished 16th in the Championship last season, started this season with successive defeats to QPR and Charlton Athletic and are currently 23rd in the table.

Jones became Stoke’s manager in January following the sacking of Gary Rowett. So far, the Potters have won only 4 out of the 24 matches under the Welshman.

Ashton who played for the club’s youth team, feels that Jones won’t last beyond October. The 35-year old wrote in his column for the Mirror: “I can’t get my head around how poor Stoke have looked, especially defensively. You look at their starting XI and think, ‘This is a great team. It’s a strong team that should do really well’. But they have looked flat again this season.

“I hate to say it – but I would be surprised if Nathan Jones sees past the end of October. They have done business, too. Nathan has been backed in the transfer market. It was a big blow losing Ryan Shawcross to injury just before the season started because of his experience, but the pressure is on.”

If Jones is to keep his job, there has to be a significant turnaround in his team’s performances because 7 months have passed and Stoke City have consistently performed poorly.

Four months have passed since the Potters last won a match in the Championship. Having won their League Cup match against Wigan Athletic on Wednesday, Stoke will certainly be in better spirits ahead of their match against Derby County today.