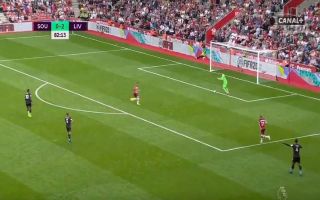 Adrian was thrust into first team action sooner than anyone expected following an injury to Alisson Becker last week.

He had a great start to life at Anfield following his penalty shootout heroics against Chelsea during the week but he’s just commited an absolute howler to give Liverpool a nervous finish against Southampton.

He wanted far too much time on the ball and just passed the ball against Danny Ings who directed the ball back past him.

Liverpool did manage to hang on for the victory to continue their perfect start to the Premier League but the mistake from Adrian meant it was much more complicated than it needed to be.