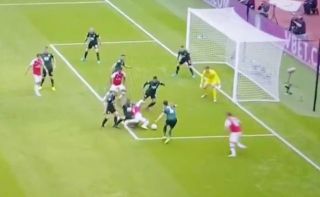 Arsenal striker Alexandre Lacazette returned from injury on Saturday to face Burnley, and he wasted little time in opening his account for the season.

The Frenchman missed the win over Newcastle Utd last weekend due to an ankle injury, but he was restored to the starting line-up by Unai Emery this time round.

He didn’t disappoint, as he found the back of the net after just 13 minutes to break the deadlock and give the Gunners the lead.

As seen in the video below, he showed great strength and composure to keep hold up the ball in the box and swivel before forcing his effort into the back of the net while practically on the floor.

It was a brilliant goal from the 28-year-old, and he’ll be delighted that he has got his first goal of the season to get him off the mark in no time as Arsenal look to make it two wins in two to start the new campaign.

Clever finish from Lacazette to give Arsenal the lead ?