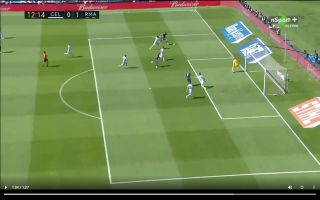 Superstar Gareth Bale showed Zinedine Zidane that he was wrong to cast him aside this summer by providing a brilliant assist to Karim Benzema vs Celta Vigo.

In the 11th minute of the tie, Gareth Bale charged down the left wing and pulled off some lovely skill to beat Celta’s defender before firing a superb low cross into the six-yard box.

Real Madrid stars Vinicius Junior and Karim Benzema both stretched for the ball and it was the Frenchman who got the touch that managed to slot the ball into the back of the net.

Take a look at Benzema’s opener below:

It’s great to see that Bale has started off the campaign with a crucial assist, the Welshman has been instrumental for Madrid and doesn’t deserve some of the harsh criticism he receives.

It’s nice to see that Benzema is also silencing the critics, the forwards was blasted before a ball was even kicked today, here’s how fans reacted to news of him starting Madrid’s La Liga opener.