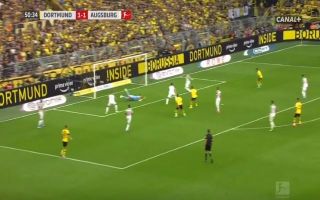 Jadon Sancho continues to excel and set an example for British youngsters that making the move abroad can be great for your career.

He was fantastic last season and has scored on the first day of the Bundesliga season for Borussia Dortmund.

He picks the ball up at the back post, takes a great touch and rifles the ball underneath the keeper.

Jadon Sancho took all of 51 minutes before opening his #Bundesliga goal scoring account for the year. pic.twitter.com/xwh6XBqtnB

It might look simple but you see so many players try and hammer it first time only to miss the target so it’s another example of how good a player he is.

The goal sparked a flurry of three in 10 minutes for Dortmund as they put the game beyond Augsburg.