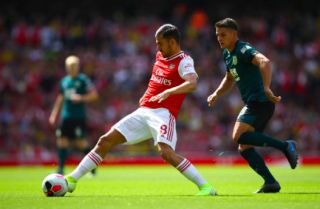 Arsenal star Dani Ceballos made his full debut for the Gunners on Saturday and played a pivotal role in their 2-1 win over Burnley at the Emirates.

The Spaniard got a run out in the opening weekend win over Newcastle Utd, but he was named in the starting line-up this time round and took his opportunity with both hands.

As seen in the videos below, he showed brilliant quality on the ball with technical skill and awareness, while he was pivotal in the lead-up to Pierre-Emerick Aubameyang’s goal as he showed a different side to his game by pressing high with intensity to win the ball back.

It looks as though Arsenal fans are certainly going to enjoy watching him this season as he was also named the BT Sport Man of the Match, although it is worth noting that he is only on a loan deal from Real Madrid with no option to buy included.

In turn, he’ll hope to deliver short-term results and help Arsenal achieve their objectives this season, and based on this performance, he’s certainly going to be a key player for Unai Emery moving forward as the statistics below certainly show just how good he was on Saturday.

No one could get near him. ? pic.twitter.com/3DwPY1oCkG