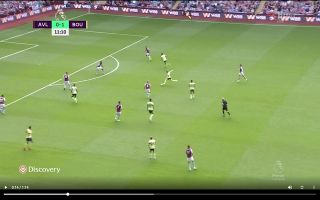 Liverpool youngster Harry Wilson didn’t waste any time in getting off the mark in the Premier League on his top-flight debut with Bournemouth vs Aston Villa.

22-year-old Liverpool ace Harry Wilson scored just 11 minutes into his Premier League debut, the winger is on loan at Bournemouth from the Reds.

Aston Villa summer signing Douglas Luiz allowed the ball to run into Wilson’s path after a poor attempt at dummying the ball for one of his teammates.

Wilson looked up from 35 yards out and fired the ball towards the goal and a deflection off defender Tyrone Mings smashed the ball against the post and into the back of the net.

Check out Wilson’s superb effort below:

Wilson’s latest strike from outside of the box also makes him the best long-range specialist in the country:

10 – Since the start of last season, Harry Wilson has scored 10 goals from outside the penalty area in all club competitions, the most of any player in the top four tiers of English football in that time. Speciality.

A loan to Bournemouth could be a great move for Wilson, the Cherries play a brilliant brand of attacking football under Eddie Howe which should allow the ace to flourish.

Jurgen Klopp will no doubt be keeping a close eye on the star’s development and there’s a chance that Liverpool could make the big bucks off a potential sale of Wilson if he continues to score important goals – just like he did for Derby last season.