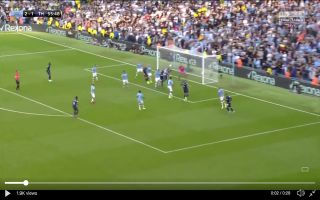 Tottenham star Lucas Moura scored a stunning bullet header to draw Mauricio Pochettino’s level against Manchester City this evening, what a goal this is.

In the 56th minute of the clash Erik Lamela whipped in a dangerous corner and Lucas rose above England international Kyle Walker to direct a header into the back of the net.

Lucas’ header flew into the goal and there was little chance that Ederson was keeping this one out.

Check out Moura’s equaliser below:

Lucas has a knack for scoring important goals for Spurs and his latest effort could even set Tottenham on their way to challenging Liverpool and City for the title this summer.