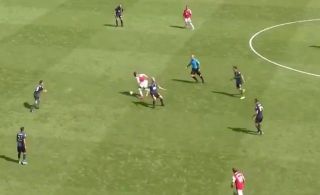 Nicolas Pepe got another taste of Premier League football on Saturday after coming off the bench in Arsenal’s 2-1 win over Burnley at the Emirates.

Unai Emery is perhaps gradually integrating the summer signing in before unleashing him in an attacking trident alongside Pierre-Emerick Aubameyang and Alexandre Lacazette.

That seems to be a sensible strategy to start with, although the former Lille winger will undoubtedly be desperate to break into the starting XI sooner rather than later.

Time will tell when that happens, but he continues to make a solid case for it as seen in the video below as he produced the skill of the match with a filthy nutmeg on Burnley ace Ben Mee.

The quick, sharp movement leaves his man trailing and simply having to accept a wonderful bit of skill has done him all ends up, while Pepe did show other bits of quality in dangerous positions to suggest that he will add another dynamic to the Arsenal attack.

It remains to be seen if he starts against Liverpool next Saturday, but Arsenal fans will certainly enjoy this moment for now…

Nicolas Pépé with the skill of the season already? pic.twitter.com/cN3ZNMKHaG