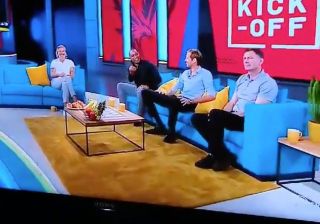 Paul Ince just couldn’t hold it in any longer as he was just seconds too early with aiming an X-rated gesture at fellow BT Sport panelist Chris Sutton.

The pair were on duty on Saturday morning as part of the channel’s build-up to the weekend’s football, with Arsenal facing Burnley in the early kick-off.

They’ve been known to constantly clash on the Saturday scores show along with Robbie Savage, but they haven’t quite been caught in the act like this before.

It remains to be seen if BT come out with anything but Ince was clearly caught aiming the w***** sign at Sutton just as the camera cut away ahead of a break.

It will probably leave him a little red-faced, while Sutton is probably lapping it all up…

???? Paul Ince giving someone the wanker sign on @btsport pic.twitter.com/df6LZoGYsp