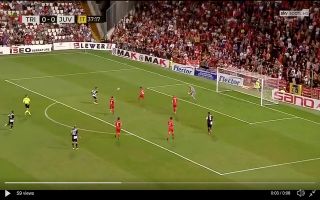 Superstar Paulo Dybala has just scored a superb solo goal for Juventus in their pre-season friendly against Serie C side Triestina this evening.

In the 38th minute of tonight’s pre-season friendly Dybala handed the Italian giants the lead with a superb solo effort, the 25-year-old picked up the ball from Fernando Bernardeschi before dazzling the defenders.

The Argentina international effortlessly glided past one defender with a sensational turn before steadying himself and lobbing the ball over the goalkeeper and into the back of the net.

Dybala was on the verge of joining Manchester United in a sensational swap deal involving Romelu Lukaku this summer, the deal ultimately fell through as a result of the Argentinean’s huge wage demands, as per the Independent.

Check out Dybala’s stunner below:

After a summer filled with transfer uncertainty, Dybala will be happy to just focus on his football. This season is massive for the star, he struggled for Juventus last season following the arrival of Ronaldo.

Dybala will be hoping that he can flourish under Maurizio Sarri and finish with a tally much higher than the five Serie A goals he achieved in the last campaign.