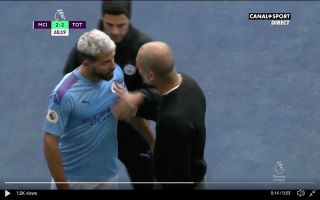 Manchester City star Sergio Aguero was involved in a heated row with manager Pep Guardiola during this evening’s mammoth clash with Tottenham.

In the 65th minute of today’s exciting Premier League encounter between City and Tottenham, Sergio Aguero was brought off and the striker was involved in a heated argument with Pep Guardiola.

Guardiola physically stopped Aguero from heading to the bench and appeared to give him a stern telling off, Aguero gave as good as he got and the pair were eventually separated by Arsenal legend and current City assistant Mikel Arteta.

Take a look at the row below:

Live on air NBC Sports suggested that Guardiola wasn’t happy with Aguero’s defending on the corner that led to Lucas Moura’s equaliser here.