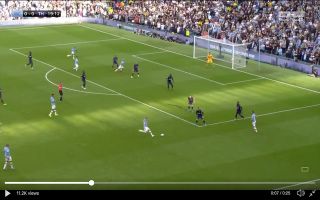 Manchester City star Raheem Sterling fired the Premier League champions into the lead against Tottenham with a header after this lovely Kevin de Bruyne cross.

In the 19th minute of the clash Kevin de Bruyne made an inch-perfect cross look effortless, Raheem Sterling was free at the far post and headed the ball into the back of the net.

With De Bruyne getting back to his best after a injury-ridden season, Pep Guardiola’s side could be unstoppable this season.

Check out Sterling’s opener below:

Sterling looks to be continuing his fine form for City this season, the winger has established himself as one of the world’s best attackers over the past two seasons.