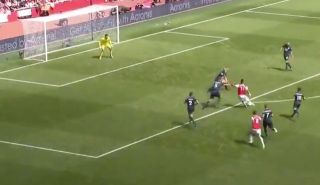 Arsenal’s prolific duo were at it again on Saturday as both Alexandre Lacazette and Pierre-Emerick Aubameyang got on the scoresheet against Burnley.

The Frenchman scored early on in the first half to put the Gunners ahead, but they saw their lead wiped out after Ashley Barnes found the back of the net just before half-time.

However, they didn’t have to wait too long after the break to go back ahead, as Dani Ceballos did brilliantly to press and win possession back high up the pitch which fed Aubameyang and he ultimately did the rest.

As seen in the video below, the Gabon international showed world-class composure and quality to skip past his man to create space for the shot and there was nothing Nick Pope could do to stop the strike.

That’s two goals in two games for Aubameyang to start the season, and he certainly looks like he’s in the mood for more as Arsenal will hope that they can hold onto their lead this time round and pick up all three points.

The forward fires Arsenal back into the lead against Burnley!