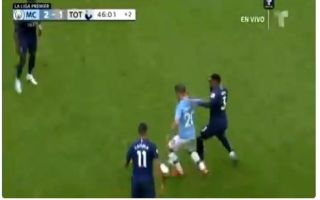 Bernardo Silva has proven himself to be just as good as the other Silva at Man City and has been showing off his dribbling ability against Spurs this afternoon.

This sequence is just ridiculous as he keeps the ball away from three Spurs players:

These fans took to twitter to express admiration for the Portuguese star and to comment on the embarrassment for the Spurs players:

he embarrassed them so much the referee said it was a foul ??

Takes the piss out of three of there players ???

Bernardo is absolutely unreal man, that is a madness from him

Best player in the league

Fair play to the lad that’s a lovely bit of skill but from the spurs players why would no one just clean him out???

It was an incredible piece of skill from Silva and you have to think that Pochettino will be urging his players to get even tighter to him as the game goes on.