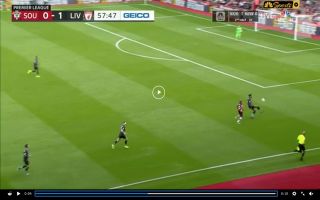 Virgil van Dijk really is on another level to other top defenders, the Dutchman played this sensational flick during Liverpool’s clash with Southampton.

In the 57th minute of Liverpool’s 2-1 win over Southampton this afternoon Virgil van Dijk effortlessly dealt with a dangerous long ball by playing a masterful flick into the path of James Milner.

The Dutchman star managed to stay cool, calm and collected – despite the fact that Saints star Nathan Redmond was breathing down his neck.

Virgil Van Dijk (Calm As You Like) Vs. Southampton from r/LiverpoolFC

Van Dijk has been a revelation since joining the Reds from Southampton, the 28-year-old has massively lifted Liverpool’s team and he’s a major reason why a once underperforming defence is now considered to be one of the best in the world.