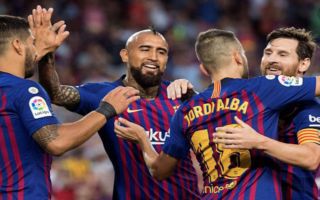 Barcelona and Spain star Jordi Alba has stated that he’ll be delighted if the Blaugrana end up bringing Neymar back to the club this summer.

Rumours regarding Neymar’s future with PSG have been rife this summer, and now, with just weeks to go until the transfer deadline, Barca ace Alba has had his say on the Brazilian.

As per Marca, when speaking about Neymar, the Spanish international stated “We have to wait for the closing of the market. He is a great player, he gave his best. It is the club’s decision. If he comes, delighted.”

This comes after a report from BBC Sport stated that both Barca and rivals Real Madrid have had offers for Neymar turned down by PSG recently, as the two Spanish giants look to be one another in the race for the Brazilian’s signature.

Neymar was brilliant during his last stint at the Nou Camp, thus it’s easy to see why Alba would be ‘delighted’ if the forward were to seal a move back to the club this summer.

During his time with the Spanish outfit, Neymar helped the club win three Copa Del Rey titles, two La Liga titles and one Champions League title, with the Brazilian also forming a brilliant partnership with Messi and Suarez up front for the club.

Given how good the forward is, it’ll undoubtedly take a huge offer from either Barca or Real to tempt PSG into selling the Brazilian.

Now, it just remains to be seen whether either club will be able to come up with a bid of this ilk in order to sign the winger.