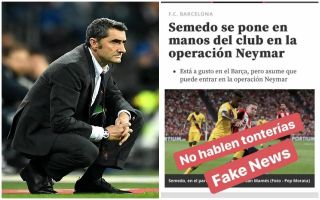 Barcelona’s chances of landing Neymar in a player-plus-cash deal have been thrown into doubt after this star has shut down claims that he’d be prepared to leave.

Barcelona star Nelson Semedo has taken to Instagram to shut down rumours that he’s open to leaving the Camp Nou as part of a deal to bring Neymar back to Spain.

Semedo reacted to this report from Mundo Deportivo which suggested that the ace was happy with the La Liga champions, but would be prepared to leave the Catalan giants in a potential deal with Paris Saint-Germain.

It could now be extremely difficult for Barcelona to agree a deal with the French giants for Neymar as Semedo has been heavily linked as one of the main pieces in any player-plus-cash deals for the Brazilian superstar.

Barcelona are now in a sticky spot, Goal report that PSG are demanding between €220m and €250m for Neymar’s services, something that the Blaugrana will find hard to finance after already splashing the cash to sign Antoine Griezmann this summer.

Take a look at Semedo’s reaction to the rumours below:

? Semedo pointed out that the news reported by Mundo Deportivo regarding Neymar (that he would be included in the deal) is fake. pic.twitter.com/BZx3iqc9Cd

Screenshot: Semedo has called these reports by Mundo Deportivo ‘fake news’ on his Instagram story. pic.twitter.com/mnoucZVm9i

It’s interesting to see how Semedo’s stand will impact Barcelona’s negotiations for the stars, movement was being made between the two clubs.

Spanish television outlet El Chiringuito had reported that Barcelona officials were set to travel to Paris on Monday to hold further talks with the French giants.

With the transfer window entering its final stages, we expect a resolution on Neymar’s future within the next two weeks.