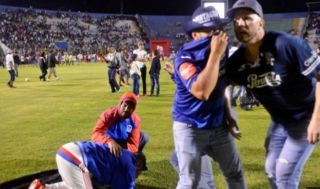 Three fans have been killed and several more injured in major riots between a big grudge match in Honduras.

Former Celtic star Emilio Izaguirre is also among players to have been wounded as stones were thrown by Olimpia fans at the Motagua team bus.

According to BBC Sport, Izaguirre and a number of other Motagua players are now being treated at hospital, while there have also been stabbings among fighting fans.

“Three people died and seven were shot and stabbed. One of them is a boy. Three of the injured adults are in critical condition,” local hospital spokeswoman Laura Schoenherr told Reuters.

This is hugely sad news and the kind of thing we surely all want to see eradicated from the game.

Emotions often run high in big derby matches all over the world, but there can be no justification for this level of violence that leads to bad injuries and even costs people’s lives.