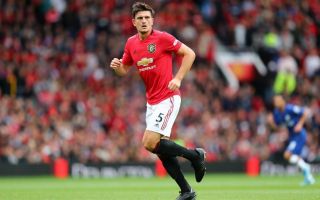 Harry Maguire is set for another financial boost this season following his arrival at Man United, with the newly-signed Red Devils star set to bring in an extra £700,000-a-year due to a new lucrative boot deal.

Maguire, who joined United from Brendan Rodgers’ Leicester City earlier this month, is currently on a wage of £190,000-a-week at Old Trafford as per The Athletic, which comes via the Express.

When worked out, this means Maguire takes home around £9.8M-a-season from his deal with the Red Devils, however it now seems like the England international is going to be bringing in even more this season following other recent reports.

As per the Sun, all of Nike, Puma, Adidas and Under Armour want to tie Maguire down a £700,000-a-year boot deal, which comes after it was noted that he doesn’t have one, something that meant he had to make his United deal against Chelsea last weekend in all-black boots.

Given that he’s recently moved to one of the biggest clubs in the world, and will sure be a player who everyone keeps an eye on this year due to his price tag, it’s not surprising to hear that all of these companies are keen on handing him a lucrative boot deal.

Maguire started his Red Devils career off with a solid performance against Chelsea on Sunday, with the player now surely looking to take this form on United’s next game, which comes against Wolves on Monday.

Maguire still seems to be himself despite just moving to one of the biggest clubs in the world, thus it’ll be interesting to see if the 26-year-old can keep his feet on the ground should he be handed more huge deals like this one later down the line.