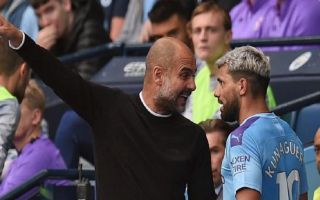 City only managed to gain a point from their clash with Mauricio Pochettino’s side yesterday despite having the lion-share of attempts and possession.

A last-minute goal from Gabriel Jesus was eventually ruled out by VAR due to handball, which came amid City thinking they’d snatched all three points from the match.

It was a dramatic blow for the Citizens to take, as something similar happened during their clash against Spurs in the Champions League back in April.

During the match, tempered seemed to be running high, with Guardiola spotted having an argument with Aguero after the Argentine international was subbed off in the second half.

However now, it seems like the Spaniard has quashed any rumours of an argument between the two, as he stated after the game, via the Mirror, that “It was a misunderstanding. Sergio was upset because he thought I blamed him for their second equaliser. Emotions were running high.”

It’ll be positive to hear for City fans that Aguero and Guardiola’s altercations wasn’t too serious, as a falling-out between the two would certainly not be a good thing for the club’s squad to go through.

It’ll be interesting to see how City respond in their next match following their dramatic heartbreak against Spurs yesterday, one that’ll certainly leave the club wondering what could’ve been had VAR not been introduced this summer…