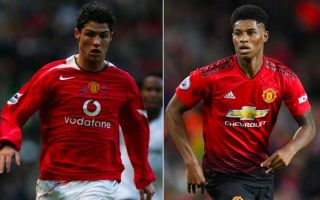 Manchester United striker Marcus Rashford is reportedly going through similar finishing drills to Cristiano Ronaldo during the period in which he turned into one of Europe’s most prolific goal-scorers at Old Trafford.

According to the Daily Mirror, Red Devils manager Ole Gunnar Solskjaer has identified Rashford as a player who could make a similar leap, and has him now going through a similar training routine.

The England international certainly started the season brightly with two goals in a 4-0 win over Chelsea, and he’s at the age now where Man Utd will be hoping for more consistency from him.

Rashford’s highest tally in a single season for United is 13 goals, which he managed last season and the year before, but he certainly seems a player capable of hitting between 25 and 30 per year.

It’s a big ask for Rashford to completely replicate one of the greatest footballers of all time, but fans should still be excited that he’s working on becoming a more lethal goal-scorer, with the onus on him to up his numbers after the summer sale of Romelu Lukaku.